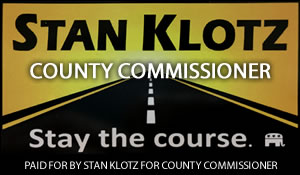 A complaint has been filed with the Marshall County Election Board by Nicole Haskins against the financial report filed by Stan Klotz for his bid to serve a second term as County Commissioner.

The complaint was dated October 28 and states that Haskins has “several concerns regarding his reports for the Pre-Primary period.”  Haskins had initially filed a complaint during the primary election alleging that Klotz had comingled this campaign funds with his private funds which are not allowed.  On May 2nd he filed an amendment indicating his funds were in Lake City Bank including the account number.  During the local Election Board hearing on May 13th, Klotz was asked if he had separated the campaign funds and he said under oath that he had not.  At this point, Haskins states that Klotz hasn’t filed any amendments disclosing a change in bank accounts for his campaign funds, separating them from his personal account.

On the new Pre-Election report filed on October 17th Haskins has found discrepancies that don’t add up or correspond with the Final/Disband Committee report of Better Government Hears People (BGHP), a local Political Action Committee.

As County Clerk Deb VanDeMark read the complaint during Wednesday’s Election Board meeting it said Klotz recorded two in-kind loans from BGHP of $766 on March 11 and $490 on March 14th for a total of $1,256 owed to the PAC, BGHP.  She noted that that amount was reflected as a loan in the BGHP Pre-Election reports as well.   Haskins alleges that Klotz reported on a “Contribution by Individual” form the in-kind loan of $1,256 instead of using the form “Contributions by Political Action Committees.  Stan does show in his report the repayment of the $1256 loan to BGHP on April 18th.

In Haskins’s complaint, she says Klotz reported the two in-kind loans from the PAC in March and April.  She goes on to say, “This leads me to believe that Mr. Klotz erroneously reported the same loan twice in his contributions, once in the pre-primary and once in the pre-election.  This error throws off his running total of contributions, leaving his campaign in the negative.”

During Nicole Haskins’s review of the BGHP final/disband report filed on July 17th, it indicates they disbursed the remaining funds across multiple candidates on July 12th.  Crosschecking with the other candidates Haskins found Faulstich for Marshall County reported the funds on July 13th and Conservatives for Nicole Cox reported the fund on August 8th and Conservatives for Johnson listed the donation on July 18th.  Klotz didn’t report the $3,000 contribution on the form he filed in the Clerk’s Office on October 17th.

Eleven minutes after filing his Pre-Election report Klotz filed a Large Contribution report which listed the $3,000 from BGHP on October 17th.  This issue is the PAC had been reported closed 3 months prior.

Haskins urged the Marshall County Election Board to investigate the matter further citing Indiana Code 3-9-4-13 which gives the Election Board the authority to make audits and investigations of campaign finance reports.  She suggested they seek proof of a separate bank account with corresponding statements to assist in clearing up the discrepancies.

The Marshall County Election Board will conduct a hearing on the formal complaint on Friday, November 18th at 11:30 a.m.