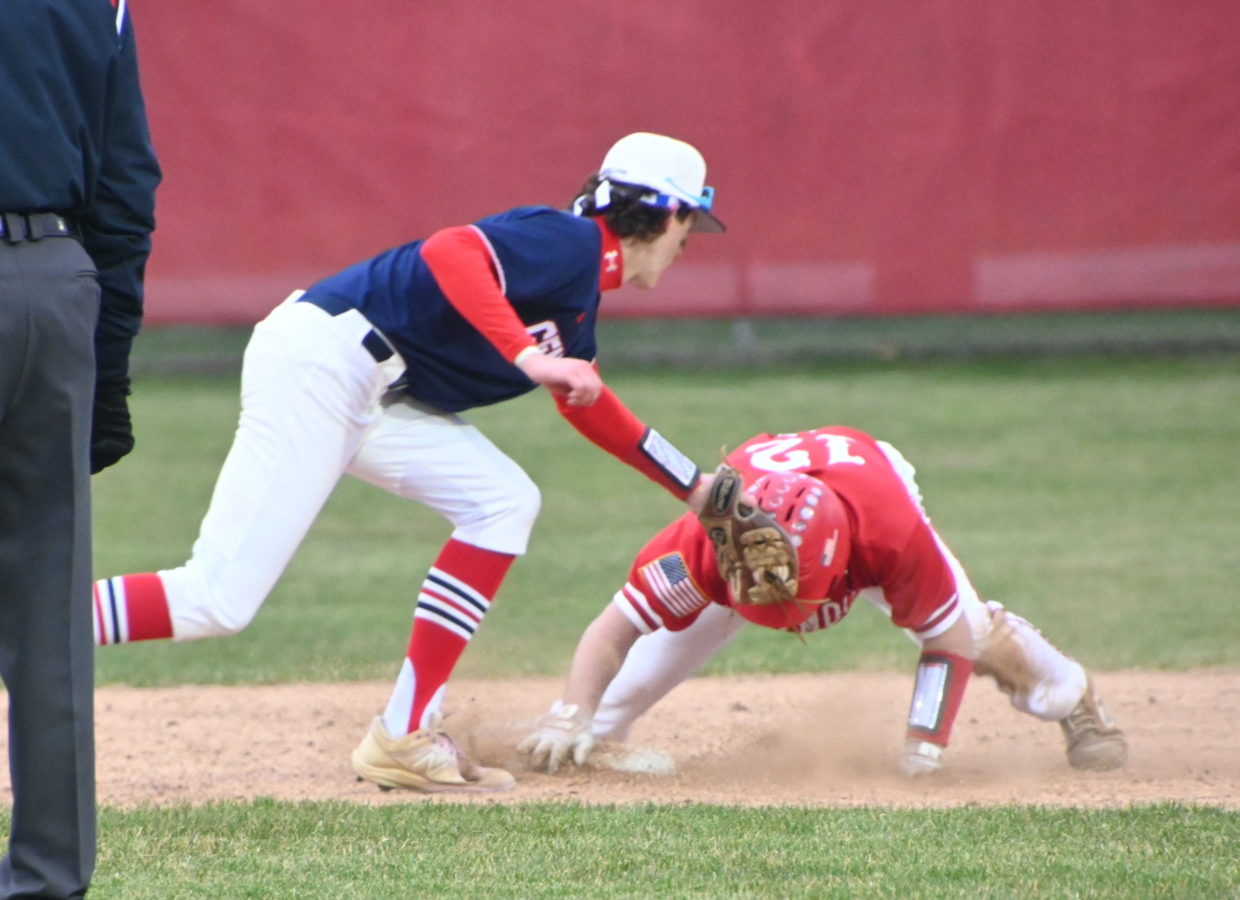 PLYMOUTH — It was the best of games, it was the worst of games and in the end, it was a South Central win over Plymouth by a final of 17-12.
“Anything that could happen in a game did,” said Plymouth head coach Ryan Wolfe. “We didn’t get off to a good start at all. We battled back and couldn’t get a couple of runs there to get the lead. Give our kids credit for battling back and give their kids credit for taking advantage of a lot of mistakes we had.”
Indeed it was not a good start for the Pilgrims at all with South Central plating 13 runs in the first four innings helped by seven Plymouth errors. Meanwhile, the Satellite starter Brayden Grass was pounding the strike zone and giving up just one Plymouth run.
“They did things well,” said Wolfe. “Early on their kid was throwing strikes and we gave them a lot of free bases and threw some things away. They run the bases hard, I knew they did and they were going to be aggressive.”
Then everything changed.
“You get to the fourth inning and your down 13-1 it’s like what do we do?” said Wolfe. “We strung a few hits together and you know how hitting goes you get a few and kids start feeling confident. We gave ourselves a chance to win.”
In the fourth Plymouth put up eight hits to score 10 runs and cut a 12 run deficit down to 2.
The big blows were a pair of doubles in the inning by Tanner Feece to score thee, and a two-run single by Boston Berkeypile.
Tanner Feece had a rough start on the mound and came to the bench after just two innings when Noble Bockman entered the game on the mound.
Later Feece re-entered the game in that big fourth inning to deliver some clutch at-bats.
“That’s who Tanner is,” said Wolfe. “He didn’t sulk and feel sorry for himself, he was up cheering for Bock. He could have come off and pouted but he hung in there and came up with two huge hits.”
Another big performance for the Pilgrims came from Cam Shively who entered the game after the Plymouth uprising in the fourth and kept them within striking distance.
“He came in when the game got close when we scored that 10,” said Wolfe. “I told the dugout whether we win or lose was going to be decided by the next half inning and if the momentum would stay. He went out and got three outs.”
The Pilgrims were within one but in the top of the seventh, two more Plymouth errors let South Central push across four more to put it out of reach.
A total of nine Plymouth errors coupled with seven walks and six South Central stolen bases in the game gave the Satellites a lead that was too big to overcome.
“We came in having played pretty well defensively and we bounced a lot of balls tonight,” said Wolfe. “A lot of balls hit the ground. It’s cold, I know your hands are cold I get all that but we are better than that we just had some key errors tonight.”
It’s the first loss for the Pilgrims who are now 2-1. Saturday’s scheduled game with Mishawaka Marian has been canceled and will be played at a later date. They will be in action again on Tuesday at home against Rochester.
•SOUTH CENTRAL 17, PLYMOUTH 12
at Bill Nixon Field
SC 3 4 4 2 0 0 4 17-11-0
Plymouth 0 0 1 10 1 0 0 12-9-9
WP — Grass. LP — Feece (0-1). 2B — Glisic (SC), Huizar (SC), Hanchar 2 (SC), Feece 2 (P), Weidner (P).