Walk off win for Plymouth in home opener 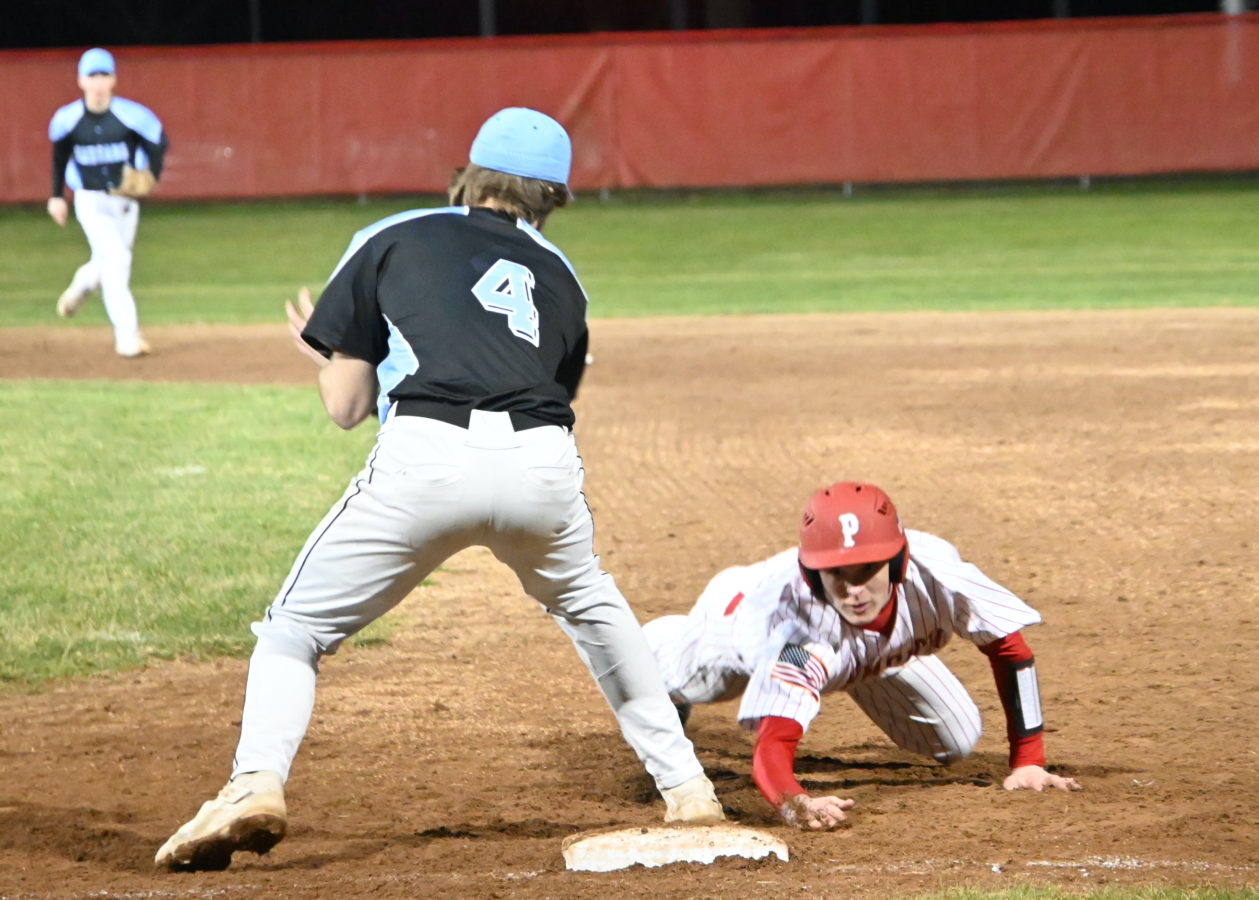 PLYMOUTH — The script for the Plymouth home opener at Bill Nixon Field was a drama and on this night it had a happy ending as the Pilgrims came away with a 3-2 win in eight innings over South Bend St. Joe.
“That was a great ball game,” said Plymouth head coach Ryan Wolfe. “We expected it to be a great ballgame. Our kids battled and got out of some jams and they (St. Joe) did the same. We had some runners in scoring position early and they made some big pitches when they needed to. It was just a good high school ball game.”
Scheduled as a day game weather conditions forced the teams to play a “doubleheader” with the JV squads squaring off first and St. Joe coming away a 5-2 winner.
The varsity game looked like it might end with the Indians coming away with a second win, but Cam Shively’s sacrifice fly that was just deep enough to score pinch-runner Trey Hall from third was the winning blow.
Plymouth struggled early to get anything off of St. Joe lefty starter Jack Quinn.
“He hides the ball well, it was hard to see,” said Wolfe. “We thought maybe the second time through the order we’d see some fastballs and he started mixing in a few breaking balls and off-speed stuff and had us out in front and mixed in the fastball and he was sneaky fast.”
Plymouth starter Skyler Aker was just as good with four innings of work striking out five with just three hits and no earned runs. The only blemish, one pitch that left the park as a two run homer for St. Joe’s Zachary Stawski.
“One bad pitch. He hung a breaking ball and he had a good swing on it and hit it over the 344 sign,” said Wolfe.
After that Aker got out of one other jam in his last inning.
“We had him on a 50 pitch count and he was at 53 and we decided to give him one more inning,” said Wolfe. “That’s what it takes is finding a way. That was kind of our nemesis last year was getting out of innings and finding a way to get out of those innings.”
Matt Manzuk came on in relief and at times was overpowering striking out seven in his four innings of work.
“Matt did a great job of keeping us where we needed to be to give ourselves a shot to win the ball game,” said Wolfe. “All winter we thought his bullpen sessions have been awesome. He’s another year older and he’s got a new focus and another year in the weight room. Last year he left a lot of balls up and his velocity has jumped about five miles per hour at least.”
“We had the two errors in one inning and other than that we played very well defensively. That’s what we expected,” said Wolfe. “With our guys another year older and having that confidence and poise out there in moments and make pitches when we needed to.”
Plymouth moves to 2-0 on the year with a game Friday against South Central at Bill Nixon Field. First pitch is slated for 5:30 p.m.
•PLYMOUTH 3, ST. JOE 2
at Bill Nixon Field
St. Joe 0 0 2 0 0 0 0 0 2-6-7
Plymouth 0 0 0 0 0 2 0 1 3-5-2
WP — Manzuk (1-0). LP — Thomas Eck. HR — Stawski (SJ). 2B — Quinn (SJ), Shively (P), Pittman (P), Aker (P).