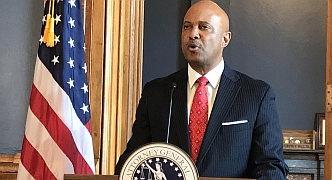 Attorney General Curtis Hill has joined five other attorneys general in filing a brief with the U.S. Supreme Court challenging a court decision rewriting Pennsylvania’s absentee ballot receipt deadline.
The brief argues that, under the Constitution, state legislatures must choose the point at which states stop receiving absentee ballots and start counting votes — not state courts such as the Pennsylvania Supreme Court.
Pennsylvania voters had 50 days to return their absentee ballots to ensure they were received by Election Day. Failure to do so was not the fault of state election law. The brief points to other courts that have upheld Election Day receipt deadlines, both before and during the pandemic.
In the brief, the attorneys general argue that the Pennsylvania Supreme Court improperly repealed the state legislature’s deadline by writing in a new postmark deadline with an arbitrary three-day-after-Election-Day cutoff.
“The U.S. Supreme Court has correctly stated previously that courts should not attempt to usurp the authority of state legislatures in matters related to election laws,” Attorney General Hill said. “With this brief, we are simply asking the Supreme Court to continue to uphold that principle.”
Oklahoma Attorney General Mike Hunter, who led the brief, made a similar point.
“The Pennsylvania Supreme Court acted in a legislative capacity when it changed the election rules,” he said. “Article I, Section 4 of the Constitution is clear — it is the duty of the legislative branch of each state that determines election rules. State election deadlines give the public the ability to quickly know the results of the election and promote confidence in those results. Changing the rules of the election right before voting starts robs the state of being able to set its own election laws and causes confusion among voters. We encourage the U.S. Supreme Court to review this case without delay.”
The decision by the Pennsylvania Supreme Court has consequences that could have a national ripple effect in future elections, the brief reads. It has created chaos that makes it impossible for state legislatures to know in advance whether the election rules they have enacted will or will not be reimagined by courts.
“Review is warranted now, even after the election, to secure the constitutional framework for our most fundamental democratic processes,” the brief concludes.
The U.S. Supreme Court need not wait for the next election cycle to precipitate yet another deluge of litigation allowing state courts to once again amend state law right before the election — and for the beneficiaries of these unconstitutional actions to argue that there is once again not enough time for this Court’s careful review on the merits.