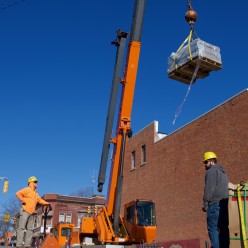 It has been a busy three years for The REES Project Committee and through the generosity of many, this project continues to move forward with sights set on a celebratory re-opening in the Spring of 2021 which is some good news to look forward to.

The REES is nearing the completion of Phase 3 and it has taken the project to new heights with a new roof, rooftop heating/air-conditioning units and now, we are pleased to announce that an advanced technology solar energy system is in operation.

Thanks to the generosity of a philanthropic Marshall County family, 100% of the cost of the system has been underwritten. Solar committee co-chairs, Bill Langdon and Jim Hartung agreed: “We are ecstatic about this donation from a donor that shared our vision for an efficient, responsible and sustainable electric source. This project ‘checks all the boxes’ even a lobby monitor that will give patrons a “real-time view” of its performance. It will be a teaching tool as it will show each panel’s kilowatt hours of energy output as well as the total system’s electric production!” The donor wished for The REES to be a model in clean renewable energy. This is undoubtedly a first of this magnitude in downtown Plymouth and in consideration with other decisions that makes this project ‘green’ driven.

The REES solar committee has spent the past year analyzing a system’s economic feasibility. Langdon and Hartung, along with a committee of three others, researched several solar installations and interviewed numerous installers and owners. The group also attended the Michiana Area Council of Governments’ (MACOG) solar education seminar and gathered information from a solar expert panel discussion at Ancilla College’s solar project ribbon cutting. Director of Ecological Relationships with The Center at Donaldson, Adam Thada, consulted with the committee as well as Leah Thill, Senior Environmental Planner of MACOG and Kelley Davies, Commercial Account Manager of NIPSCO.

After considering a half-dozen solar companies, The REES solar committee requested proposals and presentations from the ones they considered the top three. The committee ended up unanimously choosing Green Alternatives of Kokomo, a company they felt represented The REES’ best value due to outside-the-box thinking, a customer focus and a proven track record. According to Thada and Thill, this application would not even have been possible ten years ago, but significant solar efficiency increases, solar cost decreases and NIPSCO’s net metering have ‘changed the game’. Net metering allows The REES to produce energy credits that goes out on NIPSCO’s energy grid and then allows The REES to utilize them at any given time. “This generous donation will allow The REES to produce energy credits over this next year putting the theater in a great situation for sustainability,” said project co-chair Randy Danielson.

The new rooftop system, consisting of 76 portrait mounted panels and two inverters with optimizers is expected to produce about 35,000 KWH annually – the majority of the electricity needed to run everything from the air conditioning and lighting to the popcorn machine. The one-week installation was recently completed by the Green Alternatives crew in conjunction with Banner Electric and energized on Monday.

According to Langdon, “The bottom line is: The REES will have an environmentally friendly solar energy system that will offset most of the multi-purpose venue’s annual electric usage and a system that will serve as both an example and an educational resource for area citizens and students. The REES solar committee thanks the donor family, the City of Plymouth, MACOG, and NIPSCO for their commitment to sustainable energy in naming Plymouth a SolSmart-designated community. “

Having been named a primary project on the list of the Marshall County – Crossroads Stellar Initiatives, The REES project is moving closer to its interior completion in Phase 4 that is expected to be underway in the Fall of 2020. Support is yet needed and those wishing to learn more or add their names to the donor list may do so through the website: www.reesproject.com or through the Marshall County Community Foundation, 2680 Miller Drive, Suite 120, Plymouth, IN 46563.