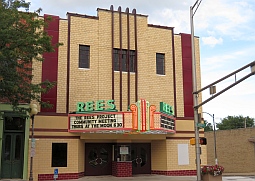 More than a dozen people stood up at Tuesday evenings Redevelopment Commission meeting to show their support for adding the Rees Theatre project to the list of projects for TIF District #1.

The Rees Theatre project was awarded a Regional Cities grant of $300,000 or 20% for the streetscape and sidewalk improvements along with the south side exterior wall.  To receive the grant a public municipality must pledge 20% and philanthropic funds must be 60%.

Randy Danielson, co-chair of the committee explained in detail the project and then asked those in the audience in support of the project to stand and give their name.  More than a dozen people voiced their support for adding the Rees Project.  The total project is estimated to be $2.68 million.

The Plymouth Redevelopment Commission unanimously approved the confirming resolution amending the project list for TIF District # 1.   It was estimated the $575,000 would be needed in 2019 so construction can begin.  The hope is the project will be completed in February of 2020 the 80th anniversary of the Rees Theatre.