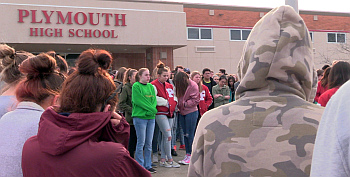 For 17 minutes, Plymouth High School students held a peaceful protest around the flagpole in front of the school to pay their respects for the lives lost in the Florida school shooting.

Plymouth High School principal Jim Condon said he is proud of the leadership exhibited by the school’s class officers through their willingness to help organize the walkout for their peers – without taking a stance on the position.

PHS students were given the choice between participating in the walkout or staying in class.

“I’m thankful that our students, when given the freedom of choice today between participating in the walkout or staying in class, did so with respect for the opinions of their peers,” said Condon. 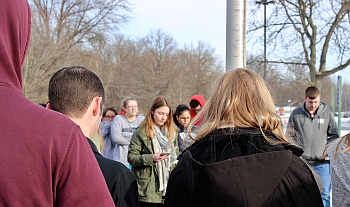 The Plymouth Community School Corporation consolidated efforts with their safety department and the Plymouth Police Department during the walkout.

Similar peaceful walkouts happened at both Lincoln Junior High School and the Riverside Intermediate School, all without incident.

Riverside Intermediate School Principal Jeni Hirschy said the 170 students who participated in the National School Walkout were directed to the school’s cafeteria where they spent 17 minutes in silence. 215 students at Lincoln participated by walking out of the school and gathering on the football field.

Around 120 students took part in the walkout at Plymouth High School.