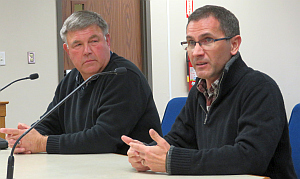 Marshall County Commissioners Kurt Garner and Mike Delp appeared before the County Council Monday morning to update them on filling the new engineering position at the County Highway Department.

Originally the position was called administrative manager when Lorie Baker held the position.  When she retired the end of November two of the commissioners, Garner and Delp felt it was time to make improvements to the department and changed the job description to only permit an engineer to apply.

The new engineering position has been advertised for almost three months.  There were three applicants; with 2 being licensed engineers but only one having the qualification the pair felt was needed. The position was offered to the individual at the salary range the county approved ($62,837-$76,800) and he declined.

Garner said, “Mike had been working with him just to see what it would take to get him here.  Obviously no promises, because we can’t do that, but we (Garner & Delp) were prepared out of our own salaries to ask you guys to re-appropriate that to make up the difference for what he was asking.”  Garner said he declined that idea too with concerns of a little “political volatility.”

The commissioners were attempting to get the base pay up to $85,000 and councilmember Penny Lukenbill said there would have an additional $25,000 in benefits.

Garner said he was at a meeting with this other job last week, talking to a civil engineer about the need for a engineer to fill the county’s position.  The guy said, “You are hunting for a rainbow colored unicorn right now.  They just don’t exist.”  The engineer went on to say that kids graduating from Purdue are making in the low $60’s without even being licensed.

Garner said, “I don’t think we are going to find that person. That’s just the cold truth of it.”  He said we have to figure out what we are going to do. With the administrator position not being filled at the county there are administrator tasks that are being covered by someone else or covered by Jason (Peters). He said, “The reality of that is, it’s not fair to anybody.”

Delp said in his discussion with paving companies that they too are having troubles finding civil engineers.  He told the council he’s been checking with the girl in the office at the highway on a weekly basis because the assistant clerks position hasn’t been filled either.  He said, “I don’t feel it’s really needed right now. We’ve been able to keep up with the paperwork, but I’m not saying that will be true when we get to the spring and summer when more paperwork will be going.”

Garner gave a little light into the engineer they are trying to lure to Marshall County.  He said, “He’s a local guy, a product of our public school, with 12 years of experienced in a county highway department larger than ours.  He’s implemented two programs in the department where he is at that would go a long way to addressing many of the issues that Mike and I have pop up on a pretty regular basis.

Garner said the engineer created a matrix that would identify roads that need attention using road counts, population density on road and the PASER testing instead of reacting to phone calls.  He said when someone calls about their road, the commissioner who takes the call should be able to say if their road is scheduled for work in the next several years, or it doesn’t rank high enough to be in the next 5 years.

The second program the applicant implemented in the other county he is working for was a phone call accountability system to make sure calls coming through the office are being responded to in a timely way. “I think that’s something is a little missed out there because when the positions were split we had somebody who didn’t have full knowledge of what the crews were doing, not because a lack of communication. It’s just because Laurie wasn’t really engaged in what was happening out on the roads. She couldn’t always give the answers that were needed.”   He went on to say, “With Jason in the field he doesn’t always have the time to make the calls back that need to come back.”

Councilwoman Penny Lukenbill suggested contracting with a civil engineer to implement the two programs Garner would like to see implemented at the highway garage.  He didn’t disagree with the idea.  The phone calling program was distributed through MACOG and maybe able to help.

Delp said, “I don’t see where you are going to get the consistency that we feel we need out there.  It’s a good option on certain things.  For long term out there, what we’re looking at I just don’t think it is.”

The two commissioners made no request and the council took no action on the discussion.  Garner said he worries that a similar situation may come up when a new Plan Director is hired later this year.