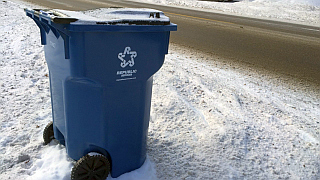 Supervisor of County Highways, Jason Peters is asking county residents to use care when placing their trash and recycling cans and totes out for collection.

County snow plows work hard to clear the entire roadway and when pushing snow off the road surface and the shoulders they sometimes have to swerve to avoid a trash can that is sitting at the edge of the roadway. He also said with the windier conditions sometimes the trash cans and totes are blown into the roadway causing a hazard to all drivers.

Most of the trash hauling companies use extendable arms to pick up the trash and those arms can extend up to 6 feet.  Peters suggested placing trash cans 3 feet from the roadway surface and removing them as soon as possible after they have been emptied when it’s easier for the wind to blow them over.