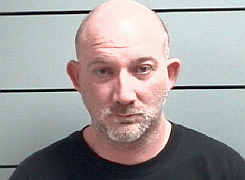 On Tuesday, January 30, at approximately 11:30 in the evening Marshall County Police Department received a report of a single vehicle crash on Tamarack Road just south of 2C Road. When officers arrived on scene they found a white, 2001 Chevrolet van sitting in the roadway.

The van was heavily damaged, and no one was around it. As officers continued to investigate the incident they later locate the driver of the van, 40 year old Matthew Morris of Walkerton who was attempting to leave the area.

Through further investigation officers discovered that Morris had been drinking alcohol prior to the accident. He was taken for a certified test and fail and was lodged in the Marshall County Jail for Operating a Motor Vehicle While Intoxicated with a prior and given a bond of $1,500.00