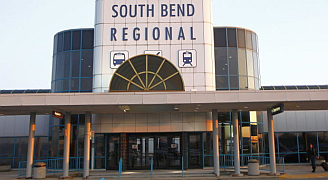 “As our presence in the global economy continues to flourish, it’s important that Indiana is connected with the rest of the world,” Gov. Holcomb said. “Today’s news is a big win for the entire state, and we’re excited to buckle up with these two new flights in South Bend. More direct flights at Indiana’s regional airports enhance economic opportunities, livability and connectivity for the business community and Hoosier travelers.”

Tickets for both routes will go on sale Saturday, Jan. 22.

The Indiana Economic Development Corporation (IEDC) will offer American Airlines up to $750,000 – to match a $750,000 commitment from the local community – over a two-year period as a revenue guarantee for the SBN-DFW route, which serves as a backstop for the airline during the start-up phase of the route. Dallas/Forth Worth was identified as a critical link by local businesses in the surrounding areas as well as by the University of Notre Dame, which has more than 150 students from the Dallas/Fort Worth area and more than 2,300 alumni currently living there.

“Today’s announcement is many years in the making,” said Mike Daigle, executive director of SBN. “We are thrilled that American Airlines is returning to South Bend with not just one route, but two. Without the Governor’s initiatives to make air service development a priority, Indiana’s legislators, and the support of the Indiana Economic Development Corporation, we would not be here today. This is a win for the South Bend region and a win for the state of Indiana.”

As part of Gov. Holcomb’s plan to make Indiana a magnet for job creation, Indiana is committed to improving the state’s connectivity by attracting new nonstop and direct flights to and from Indiana’s airports. The availability of nonstop air service is generally considered imperative for businesses when selecting locations for headquarters and expansions, and is a key resource for both Indiana businesses as well as national and global businesses that operate in Indiana. The South Bend International Airport estimates that the two new routes will have a $20 million impact on the region’s economy.

During the 2017 legislative session, Gov. Holcomb requested $10 million toward air service development for Indiana’s commercial airports, including securing a direct transatlantic flight. Last September, the stateannounced its first year-round, nonstop flight to Europe with service from Indianapolis International Airport to Charles de Gaulle Airport in Paris from Delta Air Lines. The flight, which will begin in May 2018, will give Indiana passengers and global businesses access to more than 100 destinations in Europe, Africa, the Middle East and India via one-stop connections at Paris-Charles de Gaulle.