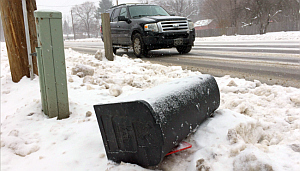 The Marshall County Commissioners were again asked to consider implementation of a mailbox police by Supervisor of the County Highway Department Jason Peters.

At their last meeting Peters recommended a policy regarding mailboxes being damaged during snow plowing season.  While the highway department has never had a formal policy, Peters said there has been an unwritten police to replace mailboxes that were hit by a snowplow but not those that were struck by the flying snow.

The highway department investigates a complaint and if it’s determined that the mailbox was hit by the plow an employee from the county comes out and replaces the box and will move it further back off the roadway.

Jason Peters estimated the number of mailboxes affected this season so far to be between 30 and 50.

Garner and Delp asked Peters to obtain information from 3 or 4 other counties to see how they handle the mailbox situations in their counties.

The commissioners tabled the request again.

It was noted by Peters that only mailboxes that were damaged would be recommended to be moved back from the roadway surface, not all mailboxes.