Friday morning about 8 a.m. emergency responders were dispatched to the southbound lanes of US 31 just south of 9A road for an accident.

The accident happened when Conway J. Elder of Kingsbury failed to see a Reichert & Knepp roll-back stopped in the median and passing lane preparing to wench a vehicle out of the median. 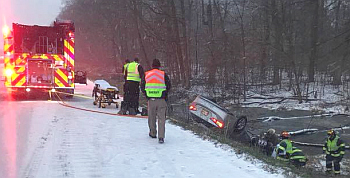 Mr. Elder was in the passing lane and drove up the downed flatbed and ramped his 2017 Chevy Malibu into the air when it rolled over and came to rest on it’s top in a deep ditch on the west side of US 31.

Elder was extricated from the vehicle by the Plymouth Fire Department.

According to the police report of Officer Phil Beam Mr. Elder was not wearing a seat belt at the time of the crash.  He was transported to South Bend Memorial Hospital with a complaint of head pain.

Marshall County Police were assisted at the scene by the Plymouth Fire Department.