A two vehicle crash on North Michigan Street Wednesday afternoon about 2:30 ended with one of the drivers being arrested for Operating While Intoxicated.

Plymouth Police responded to the two vehicle personal injury accident at the most northern entrance to Centennial Park. 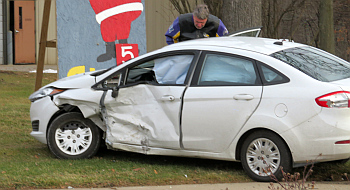 Assistant Chief Mark Owen was the investigating officer.  His report states that 28 year old Dustin Bradfield of Plymouth lost control of his vehicle and drove into the side of a vehicle at the entrance of Centennial Park.

After further investigation it was found that Mr. Bradfield was intoxicated and tested 3 times the legal limit. He was taken to Marshall County Jail and a report will be sent to the prosecutor’s office for OWI charges.