The Plymouth Indoor Winds is a combination of the band department’s top color guard, percussion, woodwind and brass students combined into a theatrical performance team.   Last season, in their first year of competition, the ensemble competed in World Class at both the state and national level.  World Class is the most difficult level of competition and these groups are expected to be state and national leaders in the circuits.    The Plymouth Winds finished as both the IPA state runner-up and the WGI national champion runner-up.

This season was another year of much success for the ensemble.   Using both original and arranged music compositions combined with colorful costuming and digital lighting effects, the Plymouth students presented their show “Pure Imagination” based on the thematic music from Willy Wonka and the Chocolate Factory movie.     The group competed again at both the state and national level. 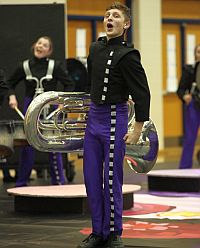 Finishing their season with IPA (Indiana Percussion Association), the group finished with a performance at their state finals ending the season as the state runner-up and silver medalist.   “This was another huge accomplishment for our kids as this year’s show was much more difficult than the one we performed last year.  It was more challenging both musically and visually and the students really had to push themselves throughout the season to move back up to the top end of our class,” said band director Bryan Ames.   “This is a challenging activity as the kids work for months to prepare for this.   Our season began in November and is just now ending in April.”    Coming back from Spring Break, the students prepared for the WGI (Winter Guard International) World Championships in Dayton, Ohio.  “The world championships bring both school and independent ensembles together from around the world.   Last year, one of the champions had traveled from Japan to attend the event.   This is a really big deal for our kids to be able to do this activity and see such amazing performing ensembles.”

The students finished their season with a fourth place finish at the national event.  “We were a little disappointed as we were the national runner-up last year.   But, this season, we scored so much better than last year and produced a much better final product.   It’s a great thing when your kids are pushing themselves to a level where they want to achieve at the highest standards in the activity.” 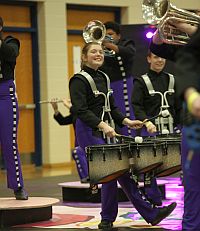 The Plymouth Winds is independently funded and the kids involved pay fees to cover the expenses of producing a show that will compete and travel at both the state and national level.   “It simply would not be possible for us to do what we do without community support.   As you can imagine, this is an expensive activity to do with the national competitions involved.   We have been blessed to have tremendous support from US Granules on an annual basis.   This company has been our leading supporter both years we have done this activity and was a support of our winter drumline program prior to it evolving into what it is now.  I think I can speak on behalf of all of our students and families when I say thank you for providing this opportunity for the kids.  None of the national tournaments would have even been possible without the financial support from US Granules.”

Congratulations to the band students involved in the Plymouth Indoor Winds on a second tremendous season.