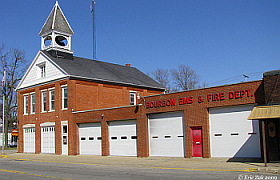 There was some discussion concerning plans to construct a firing range for reserve police officers at Tuesday’s Bourbon Town Council Meeting.  The facility would be used for qualifying. It was noted that officers currently use an FOP facility out of town at a cost of $1000 annually and that they are only able to use it 3-4 times per year. Town Attorney Mark Wagner suggested that their insurance carrier be contacted to find out if there would be specific restrictions for such items as fencing, signage, etc. The town has a lot that is being considered for the project.

The kick-off meeting for the Bourbon Comprehensive Plan was held on December 6. Town Board President Les McFarland said there were approximately 25 residents in attendance. The Comprehensive Plan is being compiled with the help of MAGOG. They plan to continue receiving information for local residents and businesses at a meeting in February; 2017.When a final date is selected for the meeting, an announcement will be published.

Although the owner of a property at 503 West Center Street in Bourbon has until Friday to remove junk cars and debris from in front of a garage, the council approved pursuing further legal action if the stipulations in past correspondence are not met. A second deadline for the removal of an RV is in April. 2017.

Among other items, the Police Department issued 11 tickets for speeding during the month of November. Police reports show that the average speed over the posted limit was 18.9 MPH.