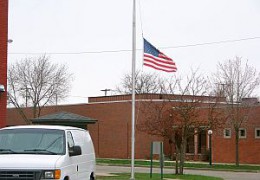 Indianapolis – In accordance with a presidential proclamation issued Tuesday evening, Vice President-elect Governor Mike Pence is directing flags at state facilities statewide be lowered to half-staff at sunrise on Wednesday, December 7, 2016 in honor of the 75th anniversary of the attack on Pearl Harbor. Flags should return to full-staff at sunset on December 7.