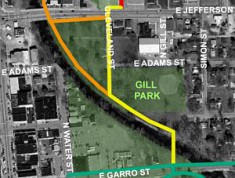 Craig Hendrix from SEH told the Plymouth Park Board the stage III submittal on phase II of the Greenway Trail is ready.  Stage III means the project design is 95% compete.

Hendrix was at Monday’s meeting to update the Park Board on the status of phase II.  About a month ago plans were reviewed and modification completed.  Since that time SEH had learned that an Army Corp. permit is not needed for the project nor is an IDEM 401 Water Quality permit.  They are required to obtain a DNR permit from both the hydraulic site and mitigation.  Mitigation is required because the project will include some channel improvements and widening.

Hendrix explained that mitigation will not be required because of the use of articulated concrete units, similar to puzzle pieces.  The concrete mates are on cables with holes in them for plantings that will hold the bank in place.   He noted that this is a much easier process then having to do mitigation.

At Hendrix’s recommendation the Plymouth Park Board signed a letter to the Indiana Department of Natural Resources confirming they will maintain the channel widening improvements as long at the new pedestrian bridge remains in place between Gill Park and River Park Square.

At this time SEH is ready for the project which is currently scheduled to bid in November 2017.  Henderson said the city has one parcel to acquire for the project and understands they are in the process of doing so.  $10,000 has been budgeted for that acquisition.

Looking at the budget for phase II of the Greenway Trail he reminded members that INDOT has allowed $1.3 million for the project.