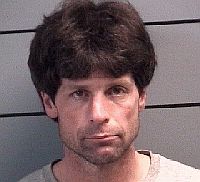 Saturday afternoon, April 30, at 2:22 the Marshall County Sheriff`s Department received a complaint of a physical fight between two male subjects in the 300 block of 4th Road near Bremen.

County officers responded to the scene and found the two subjects involved in a physical altercation; 50 year old Eric Littlejon of Nappanee and 46 year old John Allen Slabaugh of Bremen.

Slabaugh is alleged to have fired two shots from a 40 caliber handgun at Littlejon during the fight. While at the scene, county officers obtained consent to search and located what they believed to be marijuana, drug paraphernalia and a 40 caliber handgun.

Officers with the Marshall County Sheriff`s Department arrested John A. Slabaugh for possession of marijuana, under 30 grams, Violent Felon in Possession of a Handgun.