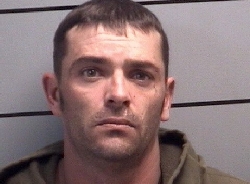 On Tuesday, April 26, at approximately 2:45 in the afternoon Officer Les McFarland with the Marshall County Sheriff’s Department conducted a a traffic stop in the 500 block of Yearick Avenue in Argos.

The driver, 38 year old Kevin L. Brock of Argos was arrested for Driving While Suspended.  During the traffic stop, it was believed that Brock was under the influence of a controlled substance.   He was transported to the St. Joseph Regional Medical Center for a chemical test and was later arrested and booked into the Marshall County Jail for Operating While Intoxicated on a Controlled Substance along with Driving While Suspended with a prior charge. The bond for Mr. Brock is $1,500.00.