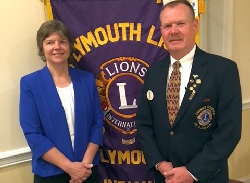 Indiana Lions District 25-G Governor, Vic Fischer was also on hand to update everyone on the Leader Dogs Kennel Project.  District 25-G has raised over $30,000 not including the Grant of $10,000 for 4 kennels.  Fundraising is in place to complete five and hopefully six kennels.  District 25-G is now the 1st District in the nation.  Each kennel services for 30 years and provides 200 leader dogs a year.  Plans are in place for a fundraiser to complete the project by selling South Bend Chocolates.

In other business future fund raisers were discussed; the first will be Saturday May 14th with White Cane Day, and May 21st it is hoped that the Plymouth Lions Club will be serving pancakes and sausage at the Farmer’s Market in Plymouth.

Lions Clubs International is the largest service club organization in the world.  We have more than 1.35 million members in more than 46,000 clubs worldwide.  Lions motto is “We Serve.”  If you or anyone you know would like to become a member of the Plymouth Lions Club, please contact any Lions Club Member.