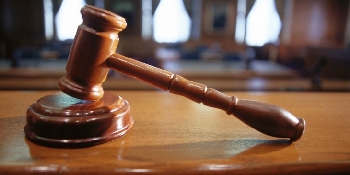 Jurors in the trial of former Marshall County Highway Department Superintendent, Neal Haeck, began hearing testimony by 11:00 A.M. on March 22. Haeck was indicted by a Grand Jury in September 2012 and later charged with Theft (D felony).

Twenty-five potential jurors were called to Superior Court I at 9:00 A.M. Of the twenty-five, fifteen were questioned by Marshall County Assistant Prosecutor, Matthew Sarber and Defense Attorney, Stanley Wruble. Six jurors and one alternate were selected.

Judge Robert Bowen called a brief recess to allow those jurors chosen to contact family, employers and other interested parties that they would be in court during the duration of the trial. Two days had been set aside on the court’s calendar for the trial.

The charge stems from allegations that Haeck knowingly and intentionally exerted unauthorized control over government property in the amount of $12,351.41 during 2012-2013. The allegations surround the sale of scrap metals.

In his instruction remarks, Judge Bowen told the jury that the defendant is presumed innocent unless proven guilty beyond a reasonable doubt. He said the burden of proof is on the state.

Following opening statements by Marshall County Prosecutor, Nelson Chipman, and Wruble, the state called a number of witnesses including, but not limited to, current and former Highway Department employees.