Ted Brown Hired as Director of Safety & Security for PCSC 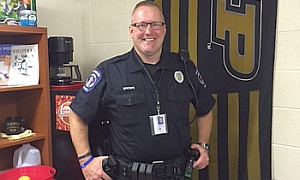 When Ted Brown turns in his badge and retires from the Plymouth Police Department this week, he will make a short walk across the high school’s parking lot to his new position.  On Tuesday the Plymouth School Board hired Brown as the Director of Safety and Security.  Brown replaces Jim Phillips who resigned effective June 1.

Brown has served as the School Resource Officer (SRO) for the past two years, sharing his time between Plymouth High School and Lincoln Junior High. Brown said there were times during his almost 21 years with the PPD that he thought about moving up to managerial positions; but when the resource officer position was posted, he knew it was a good fit for him.

Brown feels at home in the Plymouth Schools where he graduated in 1987 and has coached football for the last 15 years in addition to conducting walk throughs of all the schools in the system as part of his duties with the PPD.

Although Brown enrolled in Purdue University to study education and become a teacher, he changed majors along the way and graduated with Bachelors of Art Degree in Law and Society. Over his law enforcement career, he served as a canine officer, patrolman, bike officer and detective.

Brown said, “I continually try to educate myself.”  That trait has paid off. After taking the job as SRO, Brown went on to complete training as a School Safety Specialist. He also pointed to the skills he has developed over the past 21 years with the PPD saying, “It’s about building relationships.”

Brown said, “Safety has been an absolute concern.”

Speaking highly of his predecessor Brown said, “He’s done an outstanding job. He has made a lot of significant changes that we can build upon.” Brown said he intends to surround himself with good leaders and seek advice. “I’m not too proud to ask for help.” he said. He indicated that he will also continue to read materials on school security from a number of sources and look for trends among schools all over the country.

Brown has had some discussion with Plymouth Police Chief David Bacon concerning a replacement resource officer; but the ultimate decision of who will move into the position will lie with the Chief. He said, “We hope to have one in place within a few months.”

Brown said, “We are never going to prevent everything, but we still have to prepare for scenarios that may come up. In the time of crisis, it is not the time to be making decisions. People don’t think rationally in the middle of a crisis.”

Brown said he discussed what he termed a “new chapter” in his life with his wife Carol and his two daughters who are students at PHS and LJH. He said, “The best part is that I will be able to see my girls more often.”

Brown will assume his new duties on June 10.