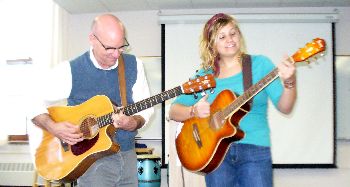 The highlight of the week was the events of Wednesday, April 9th. During the day students were able to hear the stories of sisters who have spent time overseas and in other cultures.  A lively discussion surrounded the experiences these sisters’ have had.  From 4-7 many events were held on Ancilla’s campus. Ancilla students, faculty, staff, PHJC center staff, sisters, and the community attended.

The night kicked off with a dedication ceremony to former Ancilla Art Instructor Gordon Ligocki, who passed away unexpectedly this spring. This was followed by poetry/prose readings at 4:30, music performances at 5:15, and dance demonstrations by the LifePlex Dance Academy and Ancilla College Dance Club at 6 p.m. Artwork was on prominent display in the library all week.

SGA Faculty Advisor Jill Neidlinger praised the help from the community, “We are so appreciative of the support in the community.  We had donations from Ace Fitness and Wings, Etc. for the event; both businesses were very gracious with their donation.  The Coffee Lodge had their coffee cart here for the second year; it was very popular. Earthworks also had a table and, as predicted, sold-out of their delicious cookies.”

Earthworks and Ancilla Admissions team also had information in the front hall. Moontree Studios had a display in the library over the course of the entire week with biographies of the artists displayed in both the main hallway and in the library with their artwork.