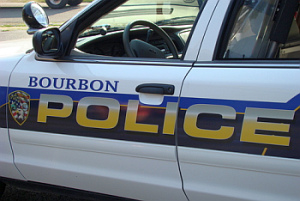 03/26/14  On Thursday, March 20th at approximately 7:50 P.M. Bourbon Police Officer Mathew Haskins received a report of a possible impaired driver in a maroon pickup truck on US 30 traveling westbound from State Road 19.   A short time later the truck was located and stopped for speeding.  During the investigation Officer Haskins arrested the driver 26 year old Olivia A. Hebert of Clay Pool for Operating While Intoxicated , Possession of Paraphernalia and Neglect of a Dependent.  She was held on a $3,005 bond. Also arrested was the passenger, 32 year old Eric W. Heiman of Clay Pool, for Visiting a Common Nuisance and Possession of Paraphernalia with Intent to Introduce.  He was held on a $505 bond.
There were two other occupants and a 3 year old child released from the scene. The Marshall County Sheriff’s Department assisted in the investigation of this traffic stop.