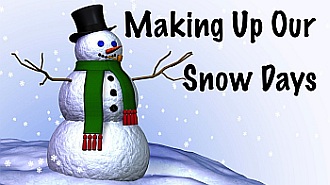 Plymouth – The Plymouth School Board unanimously accepted the recommendation by Superintendent Daniel Tyree to add snow make-up days to the school calendar.

The 5-0 vote was taken at their regular monthly meeting on March 4.

During inclement weather, school was called off for five days. Tyree said, “The state has given us several options.”

According to Tyree, grades K-8 will attend school on April 18 along with June 3, 4, and 5. Additionally, the dismissal time on Fridays for the next twelve weeks will be one-half hour later. The school corporation had dismissed early on Fridays to allow for professional development; however, now the extra one-half hour will be used for snow make-up days.

That additional time makes the dismissal time the same as that on every other school day.

Feb. 7 had been scheduled as a makeup day; however, the day was cancelled due to weather conditions.

Students in grades 9-12 will have to attend on April 18 and June 4-5. They will have a “virtual day” on April 12. Tyree said the school building will be opened for the day so students can have access to the internet if needed and teachers will be available per phone, internet or in person. Tyree said students must work on the same material that they are covering in class and could include pod-casts, I-Tunes, or lessons and complete homework.

Students will also have the extra half-hour added to the Friday dismissal for twelve weeks. According to Tyree, the makeup time each week will focus on a different class period.

The teachers will only have a one-half day on June 6.

Although the School Board voted to approve the makeup school days, it will still have to be approved by the State Board of Education.