Rodriquez-Serna Arrested for Operating Without A License 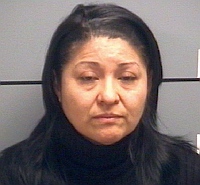 03/04/14  On Friday, February 28th at 5:58 A.M. Bourbon Police Officer Matt Geiger initiated a traffic stop on a red,1999 Chevy Cavalier going 70 MPH in  a 55 MPH zone.  He stopped the vehicle at Lincoln Highway east of Elm Road.  The driver,  40 year old Guadalupe Rodriguez-Serna of Plymouth was found to be Operating a Vehicle Without Ever Receiving a License. She was taken into custody and transported to the Marshall County Jail and held on a $250 cash bond. Rodriguez-Serna was released later that morning at 8:00 A.M. after posting bond. She is scheduled to appear in Marshall Superior Court II on March 11th.