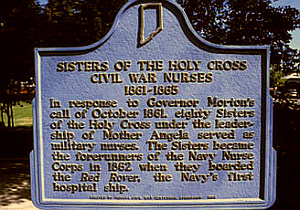 09/04/13  Saint Joseph Regional Medical Center (SJRMC) will honor the contributions of The Sisters of the Holy Cross who served our country as the first Navy nurses with a special ceremony on Monday, September 9. These nurses selflessly cared for the sick and injured soldiers of both sides during the darkest hours of the Civil War.

On September 9, 2013, the Sisters of the Holy Cross Civil War Nurses Historical Marker will be installed and rededicated at its new location on the Mishawaka Campus. The week is also noteworthy as September 14 marks the Feast of the Holy Cross.

The Historical Marker Rededication ceremony will be Monday, September 9, 2013at Saint Joseph Regional Medical Center, 5215 Holy Cross Parkway in Mishawaka at11 am.   The Historical Marker Rededication ceremony will take place at the main hospital entrance, under the tent.  There will be a noon Mass at Our Lady of Fatima Chapel.

In 1861, six months after the outbreak of the Civil War, Indiana Governor Oliver Morton asked Father Edward Sorin to send Sisters to care for wounded troops then serving in Kentucky. The next morning, Mother M. Angela Gillespie and six Sisters, none of them trained as nurses, departed from Notre Dame, Ind. General Ulysses S. Grant assigned them to a military hospital, and the congregation’s ministry in health care began.

The hospitals themselves were unsanitary and the patients in deplorable conditions. The Sisters addressed these problems the best they could, all while living in primitive circumstances. Their presence and work helped to alleviate the fear the soldiers and sailors had of military hospitals.

In 1862, several Sisters went to serve as nurses aboard the USS Red Rover, the first Navy hospital ship that went up and down the Mississippi River carrying the sick and wounded from both sides to the various hospitals. Today, U.S. naval history hails these Sisters as the pioneers of the U.S. Navy Nurse Corps. Before the war ended, approximately 80 of the 160 Sisters of the Holy Cross in the U.S. would serve as nurses.

The public is welcome to join us as we honor the founders of Saint Joseph Regional Medical Center –South Bend, the brave and compassionate Sisters of the Holy Cross. Read more about the Sisters’ nursing ministry during The Civil War in this account written by Sister Margaret May Lavonis.