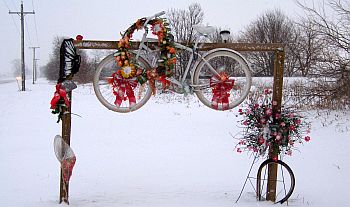 01/13/11 The Marshall County BZA (Board of Zoning Appeals) held a reorganization meeting to open 2011 on January 11. By unanimous vote, the board approved retaining the same officers as in 2010. Don Ecker will continue as president; Robert Flora, vice-president, and Deb Griewank, secretary. Other board members include Foster Davenport and Stan Klotz.

After distributing copies of the job description for Plan Director, Ralph Booker, who currently holds the position, spoke briefly to the board. The current job description was initially drafted in 1980 and revised in 2008. Book explained that the revisions were technical in nature such as a requirement to use GIS. He said, “GIS didn’t exist in 1980.”

Booker has been asked by the Marshall County commissioners to review the position/duties to determine if the work could be accomplished on a part-time basis.

Booker said he would give the BZA Board a report at the February meeting and would after addressing the Plan Commission.

Booker said there are really two jobs with one being Plan Director and the other Zoning Administrator. Booker said, “If that’s the case (becoming part-time), the duties will have to be distributed out to other people.”

Flora said, “Times are changing and your job changes with those.” Klotz asked if evaluations were done. He said, “The board should be sitting down to go over an evaluation.” “I think that might solve part of it. It might just solve the problem.”

Booker said the last evaluation that he participated in was one he generated two years ago. He said he sent evaluation forms to Plan Commission members and only received a couple back.

Booker provided the BZA board with a 2010 annual report. Reading from the report, Booker said, “The year 2010 was slightly better than 2009. We issued 371 permits and this included 79 electrical permits.” This was an increase from the previous year when they issued 367 permits. The income generated in 2010 showed an increase of $5, 097 over 2009.

Booker said the highest number of permits were for electrical upgrades and accessory structures continued to be the prominent building permit.

The report indicates that new home permits were low in 2010.The report states, “The new zoning ordinance may also have an impact since it was designed to limit residential growth in the agricultural areas.” Showing the most growth overall were the townships of West, North and German.

According to Booker, the Plan Commission heard 14 cases in 2010 and the BZA considered 30 cases.

Additional items handled by the Plan Director’s office included 45 violations including those for waste/debris, building without a permit, use not permitted in district, illegal off-premise signs, dog kennel., fence and unsafe buildings. Booker said, “In 2010 we took great pains to limit the use of legal counsel to save expenditures in the 2010 budgets. We used legal counsel in two locations.”

In other matters, the BZA unanimously denied a variance to Paul Ramer for a property at 2148 12 B Road in Argos. Ramer was petitioning to convert a single home into three apartments in A-1 zoning area. Letters in protest of the variance were received from three close property owners and Dennis Elliott, Marshall County building inspector. Although the board cited three facts of findings that were used for the denial, two board members addressed the possibility of setting precedence. Davenport said, “If we ok this, they will be popping out all over the county.” Flora referenced the comprehensive plan saying, “It would go against the comprehensive plan. We would be setting precedence there.” Klotz added, “In a deal like that, if you don’t have neighbor support, you’re out of it.”

Ramer asked if there is an appeal process. He was told he could re-apply after one year or take the matter to court. Booker said, “Essentially, you would have to sue the BZA.”

Booker informed the board of complaints filed in his office from Connie Yates and Jason Tibbs. Both Yates and Tibbs filed against Levi Kemp who operates a gun shooting range near Walkerton.  Kemp holds a variance for the gun range that limits the use.

The dates of the 14 complaints were from February, 2009 to August 2010. The nature of the complaints included, but was not limited to: More than six people on the range at one time, shooting near and after dark on two dates, shooting when children were getting off a bus, parking in area not included within the variance, children on the range, improper signage, and spooking horses which caused injury.

The BZA board took no action the complaints.

A “ghost” bicycle display erected in August of 2010 on old US 30 will have to be dismantled. The display was built to honor the death of a rider at the site.

The owner of the property on which the display rests is New York Central of Jacksonville, Florida. They were notified in September of 2010 that the display was in violation of the sign ordinance.

In December of 2010, CSX Transportation representative Mark Adkins said they have sent a letter to their lessee, Chicago, Ft. Wayne and Eastern Railroads, to have the display removed.