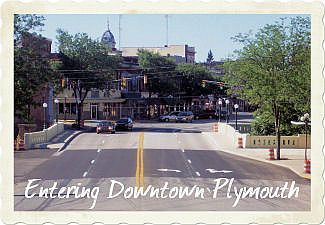 12/22/10 An application nominating the Historic Michigan Road between Madison and Michigan City, Indiana was submitted to the Indiana Department of Transportation on December 21st.  The nomination was submitted by a steering committee composed of individuals from the counties through which the historic route passes; members include elected and appointed officials, Main Street, economic development and tourism directors, historians, and business owners.  The nomination has received nearly 80 letters of support and endorsements from a myriad of boards and individuals along the route.

The Michigan Road was funded by the State Legislature in 1826, surveyed in 1829 with construction following in 1830.  By 1836 the route was essentially complete across Indiana.  The 270 mile stretch of road began in Madison and ended at Michigan City by way of the new state capital at Indianapolis.  The primary purpose of the road was to spur development of the northern part of the fledgling state, as well as create access to shipping ports on the Ohio River and Lake Michigan.  The road generally follows Highways 421, 29, 25, then Old US 31 to South Bend, then Highway 20 to Michigan City.

An organizational meeting was held in Logansport in May, 2009 for the formation of the committee.  Co-organizers Jim Grey of Indianapolis and Kurt Garner of Plymouth began the effort to have Indiana’s first state commissioned road designated a historic byway with a meeting of interested parties in Rochester in January, 2009.  After the formation of the committee, the byway proposal was presented in communities along the route including Madison, Greensburg, Shelbyville, Indianapolis, Zionsville, Argos, Plymouth, LaPaz, Lakeville, and New Carlisle, as well as at the State Byway Conference in Aurora and the Historic Transportation Conference in Delphi during 2010.

If approved by the state, the Historic Michigan Road Byway will tap into the growing heritage tourism industry, which could prove a valuable development tool for local communities’ economies.  The road would become the first state byway to traverse the state in a north/south direction, tying the state together for tourism initiatives.  The committee anticipates the inclusion of the byway on state maps, directional signage, and marketing materials as the byway moves from concept to reality.