12/20/10 The student bodies of Webster, Jefferson, Washington, and Menominee Elementary Schools and the Culver Academies collectively raised $2,572.27 for the 2010 United Way of Marshall County Campaign.

The rules for Penny Wars vary from school to school.  Menominee and Washington elementary students brought pennies to school and placed them in a jar for three days.  Each grade had its own jar.  For the last two days of the week students then brought in silver coins (nickels, dimes and quarters) and placed them in a second jar of another grade.  At the end of the second week, the value of the silver in one jar was subtracted from the value of the pennies in the other jar and the grade with the most money left was declared the winner.

“There’s some strategy involved for the students,” said Lewis, who conducted the Penny Wars at both Menominee and Washington.  Lewis has been conducting Penny Wars for years which she first started at Webster Elementary.  She further commented, “I think it’s good to get the kids involved in their community. What they do makes a difference—even if it’s just a penny.”

Jefferson and Webster’s Penny Wars are very similar to those held by Menominee and Washington.  The difference was students could bring in silver coins throughout the week.  Students bring pennies and silver (nickels, dimes and quarters) to school each day during the week. Each grade had two jars—one for pennies and the other for silver.  Pennies were placed in their own grade’s jar while silver was placed in the jar of another grade (the competition).   At the end of the week, the value of the silver in one jar was subtracted from the value of the pennies in the other jar and the grade with the most money left was declared the winner.

The 2nd grade at Jefferson won the Penny War.  The winners received a Scooby Doo Trouble board game for their class for days when inclement weather means indoor recess.  The 1st grade class was only 30 cents behind!  They earned a popcorn party.

The United Way of Marshall County extends its sincere thanks to all the students for their outstanding contribution to the 2010 campaign. 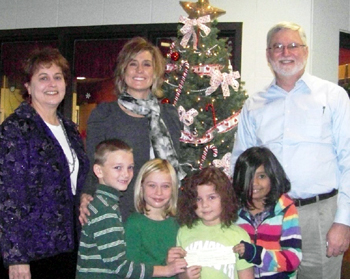 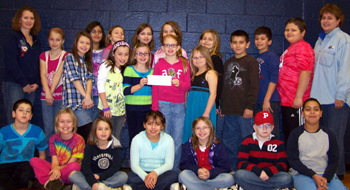 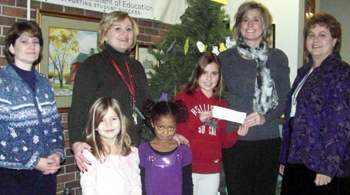