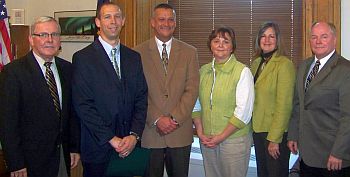 Indiana’s Growth Model measures how much students learn in each subject over a school year. The Growth Model (for statistical purpose) groups children with peers who score similar results on ISTEP exams. After two years of recorded test results, these groups are analyzed and growth/decline is then reported. The DOE labels the results, after two years, as “low,” “typical” or “high.”

“I am very pleased with Bremen Public Schools,” said Rep. Friend. “I am proud to have the DOE and Dr. Bennett honor our community’s schools with a Certificate of Achievement for high academic growth. This is a direct result of Bremen’s educational policies and teachers’ hard work.”

Eight other schools were honored in the Statehouse, along with Bremen Public Schools.

In Rep. Friend’s legislative district (House District 23), Blair Pointe Upper Elementary and Akron Elementary School were both recognized for their high academic growth as well as their county’s leader in academic growth.

“It is worth noting that Bremen is a small rural community with great accomplishments,” said Rep. Friend. “Bremen Schools have vastly different circumstances from the urban schools honored today. Bremen and one other school, of the nine that were honored, were the only rural schools reporting very high growth. The other state leaders were urban schools.”

PICTURED  FROM LEFT TO RIGHT: