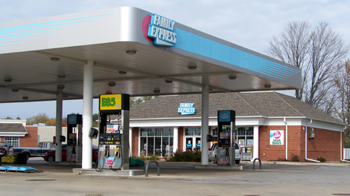 11/02/10 Family Express at the intersection of West Jefferson Street and Oak Drive in Plymouth will have to wait a bit longer concerning their application for a grocery permit to sell beer and wine at the convenience store.

Monday morning the Marshall County Alcohol Beverage Commission met in the County Building.  The board unanimously approved the automatic renewals for Pat’s Bar in LaPaz, Journey’s End in Bourbon, the Kroger store in Plymouth and Culver Marina’s Boardwalk Grill in Culver.

A half-a-dozen citizens did attend the meeting to remonstrate against the new permit of Family Express.

The first to speak against the permit was Tom Langdon from Pat’s Bar.  Langdon said there was an adequate supply of liquor outlets and this one could open the floodgates allowing more convenience stores to seek out permits, thus diluting the market.

Cain Shuppert also spoke against the permit stating, “I see several problems giving every gas station in Plymouth the opportunity and the more outlets there are the more need for enforcement.”  He continued by noting the current economic condition and suggested that, “out of town outlets are coming in to suck money out.”  He also noted that Family Express had determined the store in Plymouth would be viable when they selected this location.  He said, “They made a viable business decision to open in Plymouth without an alcohol license.”     Shuppert also commented, “Should the public be able to buy beer every 50 feet?”

The other remonstrators did not speak during the public input portion of the local ABC meeting.

Mike Berrier, Special Project Manager for Family Express and an attorney from Valparaiso spoke in favor of the permit request.

The attorney explained that Family Express has been in business for 35 years with 52 stores and they employ 500 Hoosiers.  He spoke of their community involvement and the very restrictive policies the corporation has in place for employees who sell products in their stores with age restrictions.

Currently the store policy for selling tobacco products requires the sales clerk to check the ID for anyone that appears to be under the age of 27 although the legal age to buy tobacco is 18.  If they fail to do so, it is immediate termination.

Concerning security, the attorney explained that the alcohol will be located at the back of the store away from the candy and snacks.  This location also requires customers to walk through the store reducing the idea for shoplifting.  The convenience store also features low-profile shelving and displays allowing the employees to have visibility across the store from the cash register and the store have four or five security cameras.

The attorney explained that a set number of permits are available in each city and town based on the population.  He said allowing Family Express a permit will open additional shopping opportunities on the city’s west side.  It would also allow a parent on their way home to stop in with their children and pick up a 6-pack for the game and such.

The local Alcohol Beverage Commission motioned 3 to 1 to deny the permit at the local level.  County members, Vida Creed, Katie May, and Maria Keller all voted against the permit application stating, “There is no need for service in this location.”  Indiana State Excise Officer Michelle Traughber voted in favor of the permit.

The permit application will now be forwarded to Indianapolis for consideration.  The State board can uphold the local board’s decision or overturn their decision and grant the application.  Either said will have 10 days to file an appeal on the State’s decision.