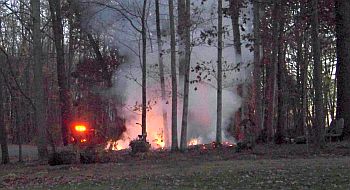 11/02/10 Monday morning the Marshall County Commissioners reaffirmed the “Burn Ban” for the entire county.  During the Commissioner’s meeting County EMA Director Clyde Avery discussed the current weather conditions and the lack of moisture in the ground.

Commissioner President, Kevin Overmyer said, “What rain we did get is gone after sun and high winds dried it up.”

It is the midst of leaf raking season and residents are having to deal with mounds of leaves, but discussions with various fire chiefs show that they are still in favor of keeping the burn ban in place.

Because citizens were not adhering to the NO BURN order the county commissioners added a penalty last month.  Those who are found to have deliberately started a fire, whether recreational, trash or vegetation they are subject to a penalty that includes all costs associated with emergency services responding to the blaze, no matter how big or little.  Determination of implementing the fine will be at the discussion of the fire chief called to assist.

Commissioner Tom Chamberlin explained that if emergency services are called to the same location for a second time, charges could be forwarded to the prosecutor’s office for consideration of a stiffer fine for violation of a declarative order.

The only report during the past weed was called in as an out of control burn of leaves at a residence at the intersection of 11B and Muckshaw Road.  The fire chief found the homeowner to be in control and no penalty was issued.

The Marshall County Burn Ban will remain in effect until conditions improve.