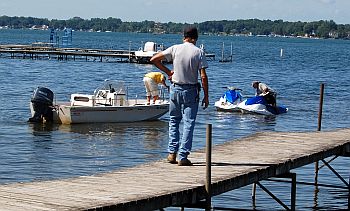 A Culver Academy student is in critical condition Monday evening after the Personal Watercraft (PWC) he was operating was involved in an accident around 9:30 AM Monday morning on Lake Maxinkuckee.

According to investigating Indiana Conservation Officer Seth Owens, 17 year old Jackson Berry of Indianapolis was operating an academy owned PWC as part of his summer academy program of study on Lake Maxinkuckee.   Berry was said to have been operating his PWC at a high rate of speed driving toward the middle of the lake.  Following behind him, on another academy PWC, and jumping his wake at a high rate of speed, was 16 year old Ryan Arnett of Carmel, Indiana.  Investigators believe that Berry was unaware that Arnett was behind him or to what his exact location was in proximity to his own craft.  Witnesses said that Berry made a quick sharp turn towards his right, putting the PWC he was operating on a collision course with Arnett’s.     The near head-on collision forced Arnett’s PWC to ride up the front cowling of Barry’s PWC, striking him about the chest with the left side of Arnett’s 10.5 foot craft.  Both operators were thrown from their PWC’s.  Other Academy students on the lake made their way to the crash site and gave first aid to Berry, who was the only one injured.

He was airlifted from the scene to Memorial Hospital in South Bend and then on to Methodist Hospital in Indianapolis with head and internal injuries and a broken leg.  As of late Monday afternoon his condition was reported as critical.

Photo provided by Jeff Kenney of the Culver Citizen.