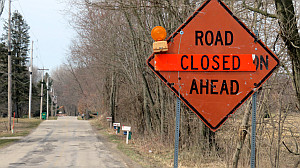 12th Road between Muckshaw and Nutmeg Roads in Marshall County will be closed to thru traffic for the next several days as Northern Indiana Construction makes necessary repairs to the bridge over the Yellow River. 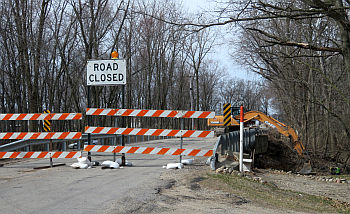 Jason Peters, head of the County Highway Department said the company is in working on several of the county’s bridges that were damaged by the February flood.  He said several bridges have experienced “scour” damage.  While the bridge may look fine from the top, it’s what you can’t see underneath the bridge that is the issue.  According to Wikipedia, Bridge scour is the removal of sediment such as sand and gravel from around bridge abutments or piers.   Scour is caused by swiftly moving water that can scoop out scour holes, compromising the integrity of a structure.  In the United States, bridge scour is one of the three main causes of bridge failure (the others being collision and overloading). It has been estimated that 60% of all bridge failures result from scour and other hydraulic-related causes. It is the most common cause of highway bridge failure in the United States. 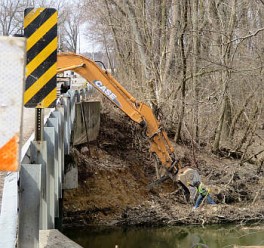 Peters said the bank on the northwest corner of the bridge was washed out causing an undermining effect.  He said, “For the safety of the citizens of Marshall County and the long term health of the bridge this work needs to be done as soon as possible.”

Traffic on 12th Road will be able to get to the bridge from the east or the west but travel over the bridge is not permitted.