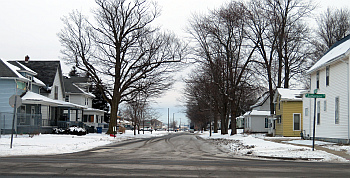 Members of the Plymouth Board of Public Works and Safety continued their discussion on improvements to the intersection of North Plum and Jefferson Streets during their meeting Wednesday evening.

Street Superintendent Jim Marquardt said his department had painted the curb on the north east side next to Eric Foster’s counseling services.  Although the curb was painted about 20 feet from the sidewalk to the north, cars are parking along the street causing the intersection to be very narrow.

City Councilmember Bill Walters said he’s seen as many as 3 vehicle parked on that side of the street making it very difficult to pass through if you are heading north and there is southbound traffic.

Marquardt said Mr. Foster wrote a letter and was not in favor of making any change at the corner because that is where some of his clients park.

Walters said this is a safety issue and he suggested moving the curbs back to widen the intersection.

Former city councilman Mike Delp said the issue was brought to his attention from Fire Chief Rod Miller.  This is the main intersection they use to take trucks into the industrial park when there are issues.  He felt that widening the curb on the west side of the street wouldn’t be too costly or the city should limit parking on the east side.

The Board of Public Works and Safety tabled the discussion to allow for more time to investigate costs to move the curbs back.