Update – Four Vehicle Crash on US 31 Claims One Life 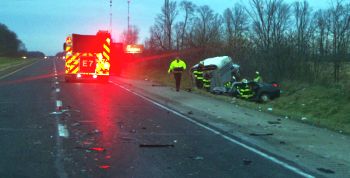 The Indiana State Police continue to investigate a four vehicle crash on US 31 at the intersection of 12th Road near Plymouth that happened shortly before 6:30 a.m. this morning. US 31 was reopened to traffic at 11:00 a.m.

Preliminary investigation has shown that a silver Volkswagen Beetle, driven by Robert Brown, age 51, of Plymouth was east bound on 12th Road at the US 31 crossover when he reportedly pulled into the path of a north bound green Saturn car. The driver of the Saturn, 50-year-old Rodney Gross, of Rochester, collided with the Volkswagen in the driving lane of US 31 sending the Volkswagen into the east ditch leaving the Saturn disabled in the middle of US 31. 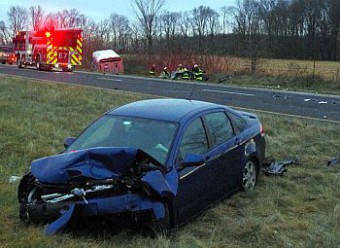 The Saturn was then struck two more times by passing vehicles before it came to a rest in the east ditch. A blue Ford Focus, driven by 49-year-old Dale Tafelski, of Rochester, struck the disabled Saturn sending his car into the center median. The last collision occurred when the Saturn was struck by a Dodge Ram pickup truck pulling a cattle trailer. The pickup was being driven by Lawrence Carrico, age 77, of Rochester. Carrico’s truck and trailer came to a rest next to the Saturn in the east ditch. The black steer that was being transported by Carrico was uninjured. 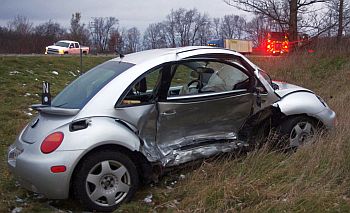 Gross, the driver of the Saturn was flown from the scene by Medflight to South Bend Memorial Hospital for serious injuries sustained in the crash. His passenger, 56-year-old Raymond Lewis, of Rochester, was killed in the crash. Tafelski was transported to Saint Joseph Plymouth Medical Center for unknown injuries he sustained. Brown and Carrico were not injured in the crash. 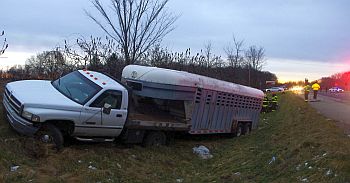 Alcohol does not appear to be a factor in the accident.