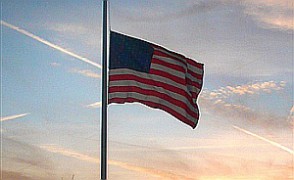 Governor Mike Pence Sunday directed flags at state facilities be flown at half-staff beginning immediately for West Point Cadet and Valparaiso native Mitchell Alexander Winey after he was killed in Cadet Troop Leader Training at Ft. Hood, TX. Flags should be flown at half-staff beginning immediately until sunset on the day of Cadet Winey’s funeral. Governor Pence asks businesses to lower their flags to half-staff to honor the service and sacrifice of Cadet Winey.

“Karen and I are saddened to hear that one of the soldiers killed in this tragic accident at Fort Hood was one of Indiana’s own,” said Governor Pence. “Our heart goes out to Cadet Mitchell Alexander Winey’s family, friends, former classmates at Chesterton High School, and all those who knew him, and I urge Hoosiers to remember the courage, service, and sacrifice of this young cadet.”

Army Cadet Mitchell Alexander Winey was one of nine soldiers killed when their truck overturned in a flooded area in Ft. Hood. Cadet Winey was in Fort Hood for Cadet Troop Leader Training.