PHS will have Largest Band to March in Indy 500 Parade 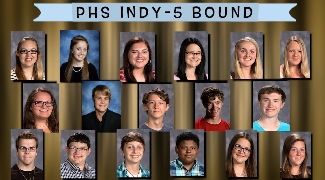 Several Plymouth High School Band members will be heading to Indianapolis once again over the Memorial Day weekend to march in the Indianapolis IPL 500 parade!

The event will be held on Saturday, May 28, the eve of the Indianapolis 500. More than 300,000 spectators are expected to line the streets of Indianapolis, joined by another one million watching from their televisions around the country.

Band Director Bryan Ames said, “We had by far the largest number of students in our entire state advance to the Indiana All-State Marching Band. In all seventeen students were selected for this group!”

Ames said, “PHS will be the largest group in the parade representing a high school, so it should be pretty easy to spot the group if you’ll be lining the procession route of downtown Indy or watching the parade at home live on TV via the NBC Sports Network on Saturday May 28th starting at noon.”

“The students in this All-State Marching Band wear their regular high school band uniforms, so this year we will be easy to pick out,” he said.

The following Plymouth High School students listed below received an invitation to march in the parade as part of the Indiana All-State Marching Band.

“We are very proud of this group of kids; they will represent Plymouth High School very well in this historic parade!” said Ames.

To read more about this year’s parade visit the following link: www.500festival.com/node/89