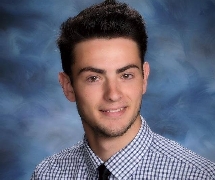 Anders is a three-year varsity letter winner and was voted team MVP the last two seasons.

During his senior season, he led the pilgrims in scoring 14.4 points per game. He also led in rebounding 5.5 rebounds per game, field-goal percentage 65% and block shots 21.

Congratulations Josh Anders for your accomplishments and on choosing Greenville College!

Plymouth frosh pick up the win

Ladycats take a win over Clay