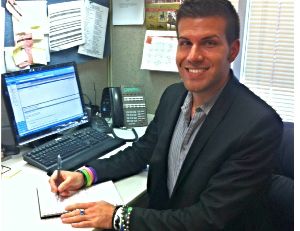 04/15/14 Ryan Wojcik, 2006 Plymouth High School graduate, has found a way to combine his interests in politics and the arts. Wojcik has just launched a blog from his Phoenix, AZ apartment. He said, “My blog is open to anything which connects philosophical ideals to everyday reality.” He added, “In pursuing artistic commentary, I hope to include everything from philosophical quotes to musical lyrics, esteemed academic articles to political fashion statements, and poems to graffiti.”

Although known for his infectious laugh and drama performances,

many of his high school classmates and teachers would be surprised to know that politics has been a passion since he was a child.  Wojcik said , “One of my earliest remembrances is sitting at the dinner table as a four-year-old , and listening to my parents debate whether they were going to vote for Bush, Clinton, or Perot in the 1992 election.”  By age five, he was walking in a parade for a political party and by fifth grade, initiating a political a poll among his classmates over educational reform.  “I spent many hours of my childhood planning my future political positions, speeches, slogans and “rise to power”.  As time went on, he started a mock presidential poll for Bush and Gore in 2000 and visited then State Representative Gary Cook at the statehouse.

However, by the time he enrolled in Plymouth High School, he said he decided that he might have been the only one engrossed in CSPAN during the summer vacation.

Speaking about his time in high school, Wojcik said, “Like most students, high school was a time where I developed a greater consciousness of self-but with that, greater self-consciousness.”

Wojcik said, “I began to feel divergence in my identity. On one hand, I was intellectually engaged in politics. On the other hand, I was opening myself to being an extroverted performer.”  Wojcik said, “I found the Speech and Debate Team and theater productions.”  He and his speech team scripted duo partner, Lindsay Rice, were named state champions in 2005. “Without the team and coaches support, I really think I would have been a dropout.”

However, when he enrolled in Purdue University, his passion involving politics was the driving force in his changing majors in his junior year and graduating in 2011 with a degree in political science. “In college I took the opposite route. I put the “performer” to sleep and focused on developing my political philosophy. Cultivating my political thoughts was an obsession and one that filled me with purpose.” Wojcik said.

Wojcik said a close college friend, Kristi Norris, asked him to relocate to Arizona. He said, “I told her I would move if I had a job.” He said, “When I got a call from her that there was a position as a processor at US Bank Home Mortgage and I had the job, all of my possessions were sold, given away or put in storage. I got on the plane with everything I had left in one suitcase.” Wojcik said.

Just six weeks ago, he changed career paths and took a position with the National Horseman as a traffic coordinator. Wojcik said, “I’m in a new phase of my life where I simultaneously and fully embrace both my political passions and my extroverted personality.”

He is quick to point out that his passions were fostered by his multi-generational family including his parents Jeff Wojcik and Josie Taylor along with is grandparents Chuck and Mary Witz and the late Dorothy Carter.

Wojcik agrees that his blog may not be for everyone, but believes it will attract a diverse audience. His blog can be found at http://thepoliticalartist.wordppress.com.