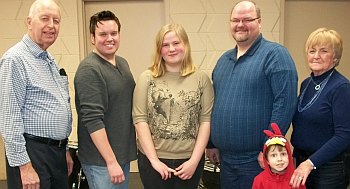 02/06/14 Plymouth High School sophomore Charity Fish has been chosen to participate in the People to People program which was introduced in 1956 by President Dwight D. Eisenhower.  Eisenhower wanted to bridge cultural and political borders through education and exchange by creating global citizens and creating a better place for future generations.  For the past 53 years People to People has allowed over 1 million students and teachers to travel overseas to six different continents.

Charity Fish is excited to have been chosen for People to People because she has always wanted to see other parts of the world.  She believes it will be a great opportunity to learn about other cultures, make new friendships and that it is a “chance of a lifetime”.

“I will be a representative of the United States,” said Charity.  “I think it will be so exciting to meet new people, learn about different cultures.  It will also help me when I apply for college.  Not only is it a great addition to my resume but by going with People to People I will get one free credit toward any college class of my choice.”

Charity will visit seven different countries in Europe.  Those countries include England, France, Germany, Belgium, the Netherlands, Austria and Switzerland.  Charity needs to raise 100 percent of the funds for the twenty day trip which begins on June 5th.  The cost of the tips is $7,000.00.

Charity is working hard to raise the money she needs.  She has taken on a part time job in town.  She and her mom are working on crafts they will be selling at a craft show in March which will be held at the Moose.  She also sells homemade baked goods under the facebook name “Charity’s fundraising homemade bake goods”.  While doing her best to raise the funds, Charity manages to maintain top grades in her advanced high school classes and she is a member of the PHS Marching Band and the Marshall County Church Orchestra.

Charity’s friends in the Marshall County Church Orchestra are lending their support to her fundraising.   On Saturday, February 15th entertainer Quentin Flagg is hosting his “Valentine Rock ‘n’ Roll and Country Show”.  The show features Flagg and the “Country with an Attitude” group, AMASAN.   During the evening, orchestra members will host a $6.00 homemade spaghetti dinner – while supplies last. The meal includes spaghetti, meat sauce, lettuce salad and garlic toast and a beverage.  Soda pop and desserts are extra.

Doors open at 6:00 p.m. at Memories Reception Hall located at 401 East Jefferson Street in Plymouth.   The concert begins at 7:00 p.m.  For further information or to purchase advance concert tickets ($10.00) call Maggie at 574-952-2807.  Concert tickets at the door are $12.00.   Spaghetti dinner tickets are a separate purchase the night of the concert.