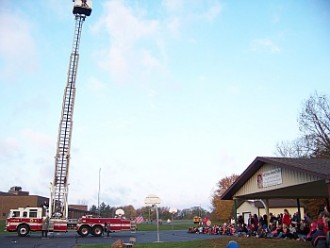 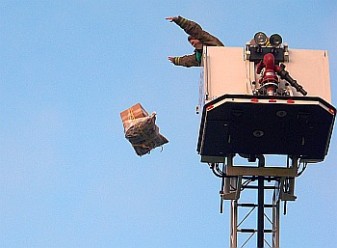 This was a fourth grade problem based learning opportunity for student involving the Purdue SLED (Science Learning through Engineering Design) Program.   The program responds to concern over the performance of the nation’s children in mathematics and science.  Institutions of higher education (Purdue) partner with K thru 12 districts and others to effect deep, lasting improvement in K thru 12 mathematics and science education. 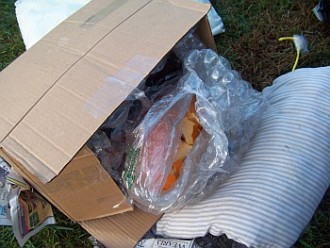 Fourth grade teacher Elaine Hebert was the coordinator for the project and worked with other Discovery Academy teachers, Kait Gustafson and Amanda Dreibelbis. The teachers divided their students into teams and created criteria for the students to follow. 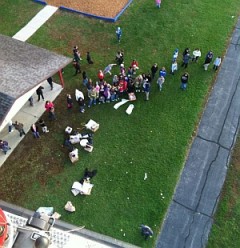 The teams were to design a vessel to protect a 5 to 6 pound pumpkin when it was dropped from 80 feet up in the air.  The Plymouth Fire Department assisted with the drop by bringing the snorkel truck out to the playground. Constraints for the problem included a weight limit of 25 pounds and a dimension of 30” by 30”. 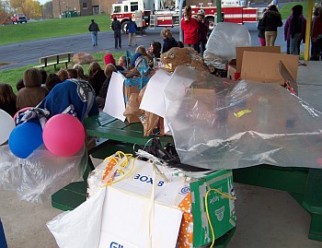 Students in the various teams brainstormed their ideas including parachutes, padding and they types of vessels.  The material list was created and had to be items that students could bring from home. 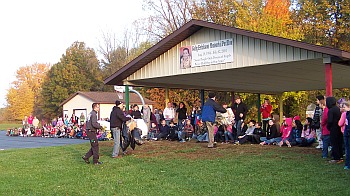 On Friday morning before the entire student body the fourth grade teachers took turns going up in the city’s ladder truck and dropping the pumpkin containers.

Following the drops students were allowed to open their containers and learn the results of the critical thinking and planning.  Mrs. Hebert said students in her class found they could improve on sharing the air, including everyone, more padding, and better parachutes.  Things the students did well with included: Working as a team-no fighting on jobs, cushioning the pumpkin, bringing in all the supplies and being accepting of each others’ ideas.  What surprised the students the most was how high 80 feet was, how much their pumpkins didn’t crack compared to the others, and the amount of spectators. 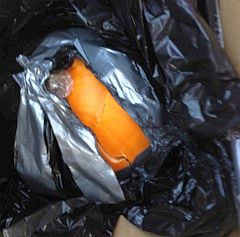 The winning team from Mrs. Drebelbis’ class and included Vandalyn Daniels, Makenna Manring, Callie McCan, Kendalle Verkler, and Lily Leech.  Their pumpkin had crack but stayed in one piece. 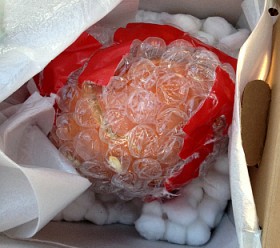 Winning team for Ms. Hebert’s class was William Kingston, Jennifer Lopez, Rafael Arriaga, and Nate Bradley.  There packaging consisted of bubble wrap, cotton balls, duct tape, floor foam, inside a cardboard box.  The team feels that their materials should have been layered deeper and thicker, they should have added a parachute, and pillows.  They were surprised at the height!  80′ is higher than they expected; they thought it looked like we were more than 200′ in the air.  They were surprised that no pumpkins from either class survived.  They wish they could give 3rd graders some advice so when they do this design task next year, they will be better prepared. 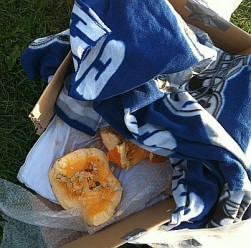 Mrs. Gustafson’s class had no survivors and definitely had one of the most spectacular mishaps – one of thier pumpkins fell out of its box mid-fall and made a big splat on the concrete. Her kids all agreed that they needed to really ensure their pumpkins stayed inside the boxes and would include more protective padding next time. 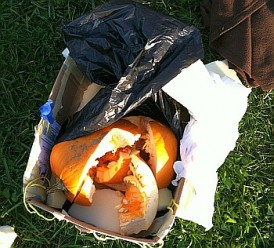 They were shocked how many other students came to see the drop. Some class members were disappointed that after all of the effort they put in, the pumpkins still broke. However, most felt that regardless of the results, they had a blast (both literally and figuratively!) and were excited to be a part of it. Gustafson said,  “What I found most interesting is that most students were very honest in their reflections and felt that their lack of teamwork may have contributed to their troubles in design. I also loved my team who blew up balloons and attached them to their box imagining some sort of “Up”-like scenario occurring – the reality that helium needed to be used in balloons for them to float was pretty eye-opening.”!