Volunteer Tees it Up and Raises $3,500 for Saint Joseph Health Center

About 30 years ago, Marshall County’s Ginny Buchman fell in love with the game of golf. “That was a long time ago and I still play about the same,” Ginny laughed. “Not very good.” But her efforts a few weeks ago are the equivalent of a 350-yard drive right down the middle. In early August, Ginny organized a golf outing at Mystic Hills Golf Course in Culver that raised $3,500 for Saint Joseph Regional Medical Center/Plymouth’s Health Center, located at 116 East Washington Street, which provides care for the underserved of Marshall County and the surrounding area.

“While I like to golf, I’ve never run an outing before,” Ginny said. “I am so pleased with this first time effort. We received such tremendous support from the Plymouth and Culver communities, the staff at the Saint Joseph Health Center, and all the wonderful folks at Mystic Hills. It just makes me so happy that so many helped for such a wonderful cause.”

The Saint Joseph Health Center is very near and dear to Ginny’s heart. She has been a Volunteer there since nearly its beginning in September 1999. She’s there every Friday from 8:30 AM to 1:00 PM. The $3,500 raised will help the Saint Joseph Health Center purchase medicines and other healthcare supplies for its many patients. “I just wanted to come up with some other way to help and the golf outing just kind of came into my head,” Ginny said. “Giving of your time, self, and skills to help people who otherwise might not receive healthcare, that’s what motivated me.” And the $3,500 has motivated her to organize another outing for the Saint Joseph Health Center next summer. “We had 12 foursomes this year,” Ginny said. “Next year, we’re going to fill all 18 spots!” 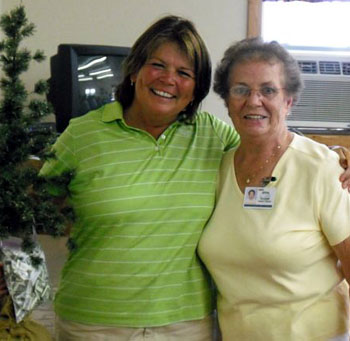 Photo: Saint Joseph Health Center Volunteer Ginny Buchman (right) with Vicki Pugh, owner of Mystic Hills Golf Course in Culver. Pugh won the $100 “money tree” at the golf outing Buchman organized for the Health Center and donated the money back to the cause.