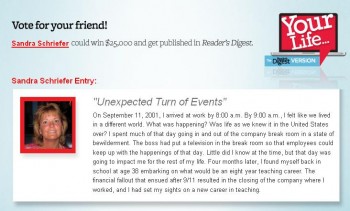 10/06/11 Sandra Schreifer of Plymouth is a contestant with her 150-word life story that was submitted to the Your Life… The Reader’s Digest Version contest.

Reader’s Digest editors will select the grand prize winner and ten runners up from the Top 100 public vote story entrants. The grand prize winner will have the chance to be published in an upcoming issue of Reader’s Digest to its more than 30 million readers and be the recipient of a major cash prize. We encourage our listeners to support Sandra by voting for her online at facebook.com/ReadersDigest.

Her story: Unexpected Turn of Events

On September 11, 2001, I arrived at work by 8:00 a.m. By 9:00 a.m., I felt like we lived in a different world. What was happening? Was life as we knew it in the United States over? I spent much of that day going in and out of the company break room in a state of bewilderment. The boss had put a television in the break room so that employees could keep up with the happenings of that day. Little did I know at the time, but that day was going to impact me for the rest of my life. Four months later, I found myself back in school at age 38 embarking on what would be an eight year teaching career. The financial fallout that ensued after 9/11 resulted in the closing of the company where I worked, and I had set my sights on a new career in teaching.

This is all part of the Reader’s Digest continual effort to enrich and simplify Americans’ lives.  This particular project “Your Life…The Reader’s Digest Version” celebrates the launch of the new book, “Life… The Reader’s Digest Version,” which is also the first of a new series, by creating a once-in-a-lifetime opportunity for people’s personal stories to be widely read.  Several runner-up stories will also receive attention and cash prizes.  Stories will be voted on by consumers and winners will ultimately be selected by Reader’s Digest editors.  Americans can vote for and submit 150-word stories about lessons, simple advice, funny moments and other life stories at facebook.com/ReadersDigest.