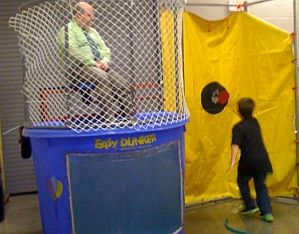 12/20/11 Usually people don’t like to hear that they are in “hot water”, but Menominee Elementary Principal Michael Dunn was glad that the dunk tank set up in the school’s cafeteria was filled with warm water. For the past five years, Dunn has let all of the kids in the school who achieved their reading goals have a chance to dunk him. On Thursday, students did just that and he landed in the water 70 times.

The unusual incentive was given to the students during the second quarter of the school year. Dunn said in grades 1-2, 95 percent reached their goal and in grades 3-4, 90 percent hit the mark.  According to Dunn 65 of the 68 first graders, 74 of 76 second graders, 62 of 76 third graders and 60 of 66 fourth graders read to the levels established by their teachers.

Dunn said, “Although it‘s getting harder on the body, but it’s good to match the enthusiasm of the kids.”