Half a World Away, Argos Grad Making a Difference 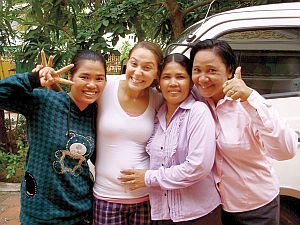 The Argos High School and Ball State University graduate grew up in the American Midwest, but knew she wanted to serve somewhere else. With God’s leading, she decided to go help other young girls who weren’t even given the opportunity to have a dream.

As she was finishing her degree in interpersonal communications at Ball State, Heather was doing her homework on another subject – the trafficking in young girls in Southeast Asia. The subject kept coming up in classes on women’s issues and other courses she took to complete her degree requirements and when she was done, her course was set.

“I knew I wanted to do some sort of mission work overseas, since I was 14 really,” she said from her Argos home, back for what she hopes is just a short visit. “I read a lot of books, did a lot of research, and God really put a burden on my heart for that part of the world. I starting studying about Cambodia and the history – the genocide in the 1970s and all the civil wars that followed – and how far behind the rest of the region that had left them. I knew I wanted to help.”

In her research Heather came across an organization in Australia that ran a home for girls who were recovering, or had been rescued from trafficking called She Rescue Home.

“They were looking for a volunteer for six months at the shelter and I went,” she said.

It’s a long way from Argos to Cambodia, but for Heather the distance wasn’t quite as great.

“I loved it the minute I got there,” she said. “I felt like I had prepared myself fairly well and it felt very much like home. I had a (language) tutor a couple of days a week and I learned enough to communicate. I could get myself home if I had to.

“Really it’s kind of strange things that get to you. I went with a friend to renew their visa in Vietnam one weekend and the town we were in had a movie theatre and we thought ‘Wow a theatre we can see a movie.’ The crazy thing is that when I was home going to the movies wasn’t something I did all that often, but when it comes along in south east Asia you take advantage of it.”

No matter how prepared Heather thought she was, it could never make the work with young girls who had been sold to others easy.

“It’s definitely difficult work. It’s not work for everybody,” she said. “I learned to cope with it in the way that I can’t fix the entire problem, but I can help this particular girl. It’s very exhausting and frustrating work and you learn how to step away when you have to. I knew it was where God wanted me and I relied on His help to get me through those tough times.

“There are days when it can be overwhelming but you look to something positive in every situation. We had a girl who got to the shelter about the same time I did. She had actually tried to commit suicide shortly after she got there – she had stolen some pills from a staff member and had taken them all trying to kill herself. She wouldn’t participate in anything the other girls were doing. She’d say no, she just wanted to sit there and do nothing. She was terribly angry and withdrawn.

“In the course of working with her she became involved with a sewing vocational program. She became so excited after going the first time and suddenly you couldn’t wipe the smile off her face. The women she worked with helped her make a skirt that first week and she couldn’t stop showing off that skirt to anybody she saw. Suddenly she was the girl making contact with all the new girls as they came in, asking them what she could do to help and always telling them something that would make them smile and laugh. It’s moments like that that make all the frustration disappear.”

The frustration has disappeared enough to help Heather want to go back to the country, for a longer period.

“I want to go back for a year and a half hopefully starting in August,” she said. “I’ve been in touch with an organization that is trying to set up a similar program for boys in the area. Most of the effort has been directed to girls, but there is a great problem with trafficking in boys and much of it goes unreported. They need somebody to help do research and set up the program. I need to raise my own support in order to go so hopefully I can do that by August.

“There are so many beautiful things in the country, the people are beautiful. Most of the staff at the shelter were local people just trying to help their own people. It’s just so encouraging to me to see people trying to help others.”