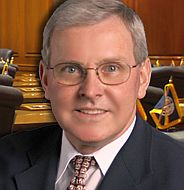 House Enrolled Act (HEA) 1091 addresses the problem of nuisance lawsuits filed against farmers for the sole purpose of disrupting the farming operation.  If a judge finds a suit against a farmer to be frivolous, the farmer is entitled to reasonable attorney fees from the person who filed the nuisance action.  The amount awarded to the farmer is based on the customary hourly rates charged in the county where the suit was filed.  The legislation also stipulates that simply losing a lawsuit is not grounds for finding the action to be frivolous.

“Actions have consequences and lawsuits should be filed for legitimate purposes, not just to discourage or delay a farmer’s expansion or operation,” said Rep. Friend.  “This measure won’t give farmers immunity if there is a legitimate action against them, but it will help them deal with large legal fees from frivolous lawsuits.”

“Innocent property owners should not bear the financial burden of other people’s unlawful acts,” said Rep. Friend.  “Mandatory restitution will help people clean up their property from extensive damage by illegal drug manufacturers.”