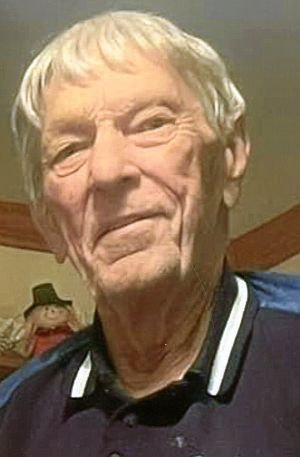 Born September 6, 1936, and the fourth of eight children born to Elvin E. and Lucille (Richey) Smith, Bill grew up in Tyner, Indiana. Bill loved playing baseball and basketball. He graduated from Tyner High School with the class of 1954; he eventually went on to a sheet metal apprenticeship and earned his journeyman card.  He paid his union dues for the rest of his life.

One month later he joined the U.S. Army. He played on their basketball and baseball teams. Bill was also Soldier of the Month in January of 1961.

After his Honorable Discharge, Bill worked for Deluxe Sheet Metal with his brother Earl, as an estimator. He was very good at his job and was well respected by his customers.  He was the “go to guy” for all things sheet metal at the University of Notre Dame.

Bill could be stubborn but with a purpose and lived by the quote “right is right and wrong is wrong.” He loved his family and treasured time spent with them. He has traveled to all 50 states, Europe and spent several winters in Florida. He enjoyed mushroom hunting with his family and made the best chili.

Baseball was important to him, and he was very instrumental in the fundraising for the American Legion Post 27 Baseball Team program. He made sure each opposing team got a free hamburger at the end of the games. Bill was very proud of the baseball State Championship ring the Post 27 team won.   He and Sue Kay made it important to attend all his family’s sporting events.  One of his great joys in baseball was watching his son, Brian, pitch while his grandson, Alex, played in the outfield and tore the cover off the ball while batting.  One could see the pride busting out of his chest.

Bill was a busy man, but a behind the scenes kind. He was a Cub Scout Leader for Pack #222, which still exists today. He ran yearly fish fries with the 40/8 to raise scholarship money for the local nursing students. He bowled on Monday leagues and was league president for 16 years. Bill was a member of the Elks Lodge, Loyal Order of the Moose, a 50-year member of the Masonic Lodge, a member of the Eagles Lodge prior to its closing, and a Sheet Metal Union Local #20 member.  He became a member of Phi Delta Kappa, Delta Nu Chapter, while his son Bruce traveled through the Nation Chairs of the Fraternity.

He proudly served on the American Legion Post 27 Honor Guard, honoring many funerals for his former comrades. He served as Officer of the Legion, SAL Advisor and Vice Commander. Bill was also the Chef de Garde of the 40/8 for many years.

His is deeply missed by his wife Sue Kay; his sons Bruce William (Sarah) Smith of Kokomo and Brian Earl Smith of Plymouth; granddaughter: Brittany Runyan and her children Lillian, Myles, Grayson and Henry, granddaughter: Paige (Rob) Walker III and their children Kamryn, Carson and Creighton, and grandson: Alex (Erica) Smith and their daughter Kylie; sisters Dorothy “Dusty” Lane and Mary Anne Smith as well as numerous nieces and nephews and many great nieces and great nephews.

Bill was preceded in death by his parents; sister Virginia McCormick; and brothers Don, Earl, John, and Jim Smith.

Funeral services will be held at 11 a.m. on Thursday, December 8, 2022, in the funeral home. Visitation will resume one hour prior.

Burial will be in the New Oak Cemetery, Plymouth with Military Honors provided by members of the American Legion Post 27, Veterans of Foreign War- Marshall County Post 1162 and Disabled American Veteran Chapter 42.

Memorial contributions can be made to the First United Methodist Church, 400 N. Michigan Street, Plymouth, IN 46563 or donor’s choice.